A small city in Transylvania, also known as Hermannstadt in German, located in north-western Romania was a pure discovery for me! 🙂 It was designated the European Capital of Culture for […]

A small city in Transylvania, also known as Hermannstadt in German, located in north-western Romania was a pure discovery for me! 🙂 It was designated the European Capital of Culture for the year 2007 thanks to its medieval charm.

Sibiu got its importance in 14 century when  it became an important trade centre. In 1376, the craftsmen were divided in 19 guilds and Sibiu became the most important ethnic German city among the seven cities that gave Transylvania its German name Siebenbürgen (german: seven citadels). A number of traders, practitioners and intellectuals of the time mingled around the historic center of Sibiu enclosed by its medieval walls.

The center of happening was Piata Mare (big square) – the largest public square in the old town that witnessed the economic activities of traders in Sibiu. Numerous of assemblies of citizens, fairs and even executions were organized there.

In this market it was beheaded  in 1703 Johann von Sachs Harteneck, one of the most important personalities of the Transylvanian Saxons. During his tenure first topographical and city maps were being made. His political positions have attracted many enemies and led to the trial and sentencing to death by beheading.

After World War I, when Austria-Hungary was dissolved, Sibiu became part of Romania; the majority of its population was still ethnic German (until 1941) and counted a large Romanian community, as well as a smaller Hungarian one. Starting from the 1950s and until after 1990, most of the city’s ethnic Germans emigrated to Germany and Austria.

Pasajul scarilor (rom. Passage of the Stairs) leeads down into lower Sibiu. It descends along some fortifications under the support arches. It is the most picturesque of the several passages linking the two sides of the city.

Make sure to be on your best behavior as you cross the Bridge of Lies. It is said that young virgins in medieval times, came on this bridge to meet the boys and to plan the wedding and their future. However, girls were caught lying about their virginity, so they were thrown off this bridge. The legend says they can still be heard whispering in the quiet pubs of Sibiu.

Walking the streets I really felt weird like something’s been stalking me. And soon my friends and I realized what is all about: Sibiu is known as the city with eyes. The old historic city is composed of an uptown and downtown connected by intertwining alleyways, having tall attics with small windows known as the city’s eyes. Most of these houses are dated 15th to 19th centuries. 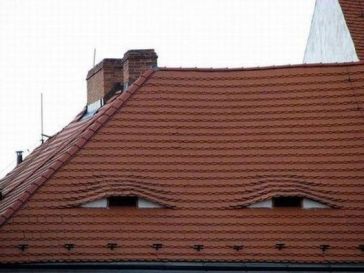