Tourism is sometimes challenging. There is a struggle that popped this time to understand this city. I didn’t get it by first. Sometimes, it’s difficult to swallow.

In the case of Nuremberg, we are talking about the actions and horrors done by Adolf Hitler whose legacy to Nuremberg is a tainted, poisoned one. It was his favourite city leading in rich Germanic and imperial history. It is used to be called the “most German of German cities.”

Nuremberg became the venue for the Nazi Party and later the place of the Nuremberg Trials – it had to compensate somehow to skip the historical judgment. The city and it’s residents paid a hefty price for Nazi Germany’s obsession with the city. Nevertheless, the locals rebuilt the city, but much of the city’s original character and medieval charm got lost.

So, Nurnberg is the second biggest city in Bavaria, just after Munich. The first documentary mention of the city, in 1050, referring the King Konrad III and Frederick I, Barbarossa – Holy Roman Emperor (mostly famous for leading the Crusades).

We have visited the Imperial castle but unfortunately had no time to enter.

In the medieval times, the city was flourishing as being the free city for trade. Plague was coming many times but the city managed to sustain.

These are the times of the great painter Albrecht Dürer. He was born in this city and made his best works.

The cultural flowering of Nuremberg, in the 15th and 16th centuries, made it the centre of the German Renaissance. In 1525, Nuremberg accepted the Protestant Reformation which led into construction of the churches not so rich as it can be seen in other catholic cities.

The large market square located at the heart of the city centre is surrounded by a multitude of must-see sights. The daily market takes place here, where you can buy all sorts of tasty treats, flowers and spices.

The main square is the most vivid during the winter times. The Christmas market originates from this city = the so called Christkindelmarktplatz.

Finaly, what is Germany if there is no good beer and sausage?

By RED RIDING HOOD Posted on 2 months ago 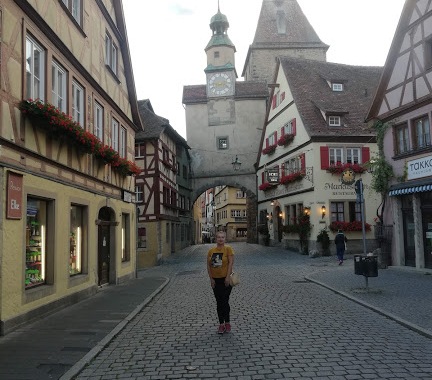 In case you want to experience Bavaria region in south of Germany and get lost in time and space, I definitely recommend you this city. It is well known for its well-preserved medieval old town, a destination for tourists from around the world. It is part of the popular Romantic Road through southern Germany.

The name “Rothenburg ob der Tauber” is German for Red fortress above the Tauber, as the town is located on a plateau overlooking the Tauber river.

So these was our entrance to the city surrounded by the wall. The Markus tower, preserved from 15th century. Our hotel was in this tower. Let me show you the creepiness…

Upon our arrival to the hotel, a lovely Lady in Bavarian clothes took our check in and helped us to find the room. Little did I know that she was Bosnian (immigration wave in the Balkans is huge and Germany is always looking for work-force). However, I was a bit surprised hearing the accent. 🙂 Later we found out that her husband is the chef in the same hotel. Oh Balkans around the world…

The hotel is the medieval tower so the halls on each floor are going in the circle. Not to mention the wooden floors, squeaky stairs, creepy porcelain dolls in the baby carts, old wooden furniture from medieval times. etc. It had a soul, dolphinately! 🐬

Due to chinese virus situation we were allowed to stay in the Biergarten restaurant for no longer than 2 hours. Fair enough. We had to continue to hit the road the next day so not much left for partying. Except that it was my birthday that night. 🙂

Upon breakfast, quick look on the city on our way to the car. Enjoy!

By RED RIDING HOOD Posted on 2 months ago