Trieste has been called the ultimate nowhere-place: officially part of several successive countries and empires through the ages, yet spiritually bound to none of them. Many of the 200,000 Triestine, […]

Trieste has been called the ultimate nowhere-place: officially part of several successive

countries and empires through the ages, yet spiritually bound to none of them. Many of the 200,000 Triestine, I came to learn, do not see themselves as truly Italian. They belong to Trieste, and Trieste alone. In fact, a small but committed independence movement is seeking the recognition of Trieste as a free city-state.

From 16th to the end of World War l it was a part of Habsburg Empire, but more a city – state than ruled by anyone. Then inhabited by the citizens of the ex – Yugoslavia and Gypsies.

Me visiting this city was kinda ad hoc everytime, as I was catching the low budget flights from local airport to Sicily and later to London. That time I was living in Zagreb as a student and tried to catch the world by its tail. Fours years laer, still the same… 🙂

My local guide was a great friend of mine Andrea, who I met in Barcelona couple of years ago. So, he showed me great places and offered me great local specialties.

We sterted with the main square Piazza Unita d’Italia with many head office buildings mostly of  classical architecture.

Statues of Thetis and Venus

In the middle of the square is the monument of  Thetis (sea nymphe) and Venus.  As the square faces the Adriatic sea it shows how important seaport it was since the Austro-Hungarian Empire times. Actually, I would call it an elegant triumph of Austro-Hungarian town planning.

Le Sartine are famous stressless ladies sitting next to the sea and chatting around. I found them very inspirative so I decided to sit next to them. 🙂 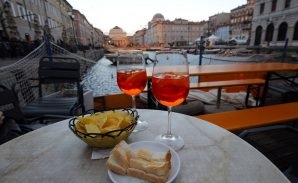 In the end we climbed to the hill San Giusto and enjoyed the great view of the city. We had a local spritz drink and some pizzetta crisps and fingerfood.