Skip to content
Chasing the traces of Charlemagne in Aachen, Germany
Home page

Chasing the traces of Charlemagne in Aachen, Germany

During my weekend jaunt to western Germany, I made a day trip to Aachen, once the capital of Charlemagne’s short-lived empire and the final resting place of ”Charles the […]

During my weekend jaunt to western Germany, I made a day trip to Aachen, once the capital of Charlemagne’s short-lived empire and the final resting place of ”Charles the Great” himself.

Aachen is the city in North Rhine-Westphalia of Germany known also as Aix-la-Chapelle in French. Its name derives from the Ach(e), meaning “river” or “stream” in Old High German.

This city lives and breathes Europe as it is practically Europe in miniature. On the border with Belgium and the Netherlands, it has encapsulated the spirit, values and ideals of Europe since the days of Charlemagne.

So who was Charlemagne and how he made this city famous?

Charlemagne, 8th century, also known as Karl and Charles the Great, was a medieval emperor who ruled much of Western Europe. In 771, Charlemagne became king of the Franks, a Germanic tribe in present-day Belgium, France, Luxembourg, the Netherlands and western Germany. He embarked on a mission to unite all Germanic peoples into one kingdom, and convert his subjects to Christianity. It was the first time these lands had been united politically since the Roman Empire.

In 800, Pope Leo III crowned Charlemagne emperor of the Romans. In this role, he encouraged the Carolingian Renaissance, a cultural and intellectual revival in Europe. When he died in 814, Charlemagne’s empire encompassed much of Western Europe, and he had also ensured the survival of Christianity in the West. Today, Charlemagne is referred to by some as the father of Europe.

The ruler seated in the Palace of Aachen a group of buildings with residential, political and religious purposes to be the centre of power of the Carolingian Empire.

Today much of the palace is destroyed, but the Palatine Chapel has been preserved and is considered as a masterpiece of Carolingian architecture and a characteristic example of architecture from the Carolingian Renaissance.

Important part of this palace and todays cityscape of Aachen is Aachen Cathedral, traditionally known in English as the Cathedral of Aix-la-Chapelle. It is the oldest cathedral in northern Europe and was constructed by Odo of Metz.

Aachen Cathedral houses a collection of medieval art objects which are exceptional in their historical, artistic and religious meaning.

Charlemagne’s throne, is the most important chapelle sight. It is an austere chair that places has been made from stone taken from the Holy Sepulcher in Jerusalem. All German kings in the medieval times were crowned on this throne.

The Barbarossa chandelier was made on the order of Emperor Frederick I, nicknamed Barbarossa, and his wife Beatrice  in 12 century. It has a diameter of 4.20 meters and is just amazing inner sight of the chapel. 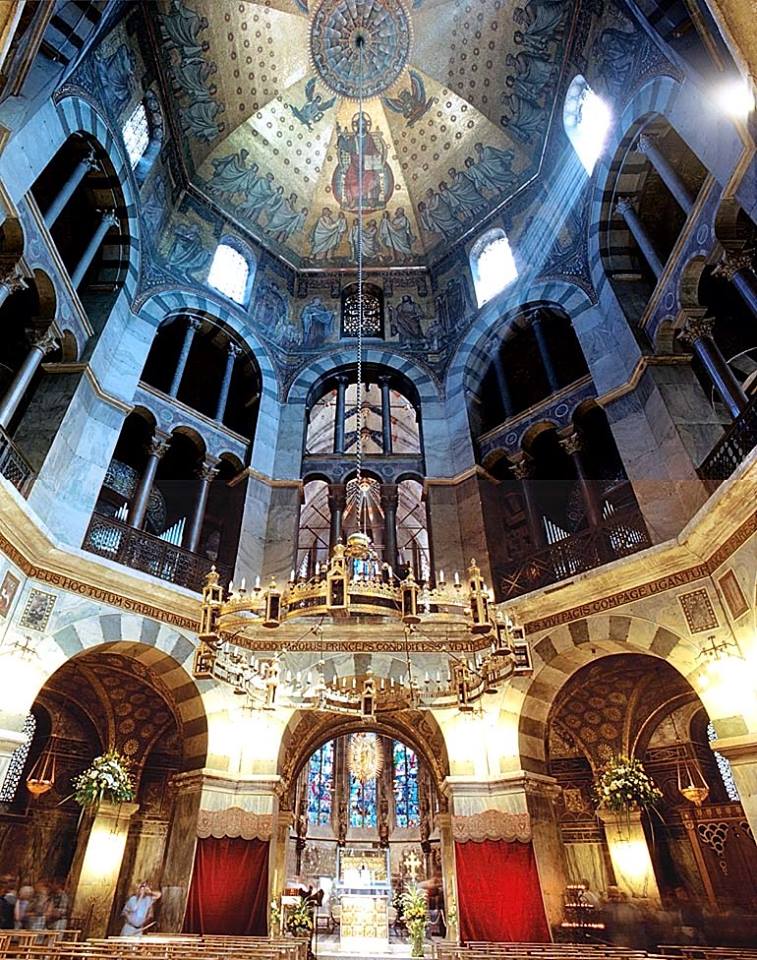 Finally, Charlemagne was buried there after his death in 814. After that, for 595 years, the Aachen chapel was the church of coronation for thirty German kings and twelve queens.

Today,  in the glory of his name, the Charlemagne Prize is given for services to European unity.

Aachen is also renowned for its relaxed atmosphere, best experienced on a stroll through the historical streets. There are charming places that to the grand old buildings dotted along the Charlemagne Route. 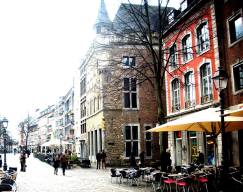