It was back in 2010 when my brother Martin and I visited this magic city. So much controversies: beauty and garbage in the streets, peace and roar, colours and grayness… […]

It was back in 2010 when my brother Martin and I visited this magic city. So much controversies: beauty and garbage in the streets, peace and roar, colours and grayness… divided by the strait of Bosporus, it is where Europe meets Asia!

However, we indeed enjoyed the great history of this city and its cultural heritage. The city was ruled by Phoenicians, Byzantine and then Ottoman Empire.

Upon our arrival the first thing to do was to walk down the Sultanahmet District – the oldest district of Constantinople (the old name of Istanbul from the times of  capital city of Roman/Byzantine Empire named by Emperor Constantine the Great, in 330 AD).

Many of Istanbul’s historical gems, mostly consisting of Byzantine and Ottoman-built monuments are in Old City. Most are located a short walk away from, if not immediately on the edges of, Sultanahmet Square, like the Hagia Sophia (turkish Aya Sofya) – a 6th century church, today a museum. From the date of its construction until 15 century, it served as an Orthodox cathedral except between in the times of Crusades, when it was converted to a Roman Catholic cathedral under the Latin Empire of Constantinople. The building was later converted into an Ottoman mosque until early 20 century when it became secularized and opened for visitors.

What I find interesting inside of this amazing old beauty is the icon of Virgin Mary on the ceiling protruding like a scratch between subsequently colored Islamic inscriptions and added icons. The legend says, when the church came to the hands of Ottomans, they added Islamic features—such as the mihrab, minbar, and four minarets, but miraculously, the icon of Virgin Mary was always coming out no matter how many times it was over painted.

From the other interesting point in the church interior I would highlight a Wishing column and the tomb of Enrico Dandolo, the Doge of Venice who commanded the Sack of Constantinople in 1204 (Crusades).

Wishing column with a hole in the middle is covered by bronze plates.The legend has it that, Emperor Justinian wandering in the building with a severe headache leaned his head to this column and after a while he realized that the headache was gone. This story had been heard among the public and the rumor regarding the healing effect of the column got around. Hence, people believed that they would get better if they put their fingers into that hole on the column and then rub them to the place where disease is felt.

No wonder the church is one of the wonders of the world!

Opposite of the Aya Sofya stands a historic Blue Mosque or Sultanahmet Mosque. It is called blue because of its blue tiles, and the blue is the popular colour in Turkey. It impressed enough early French visitors to call it turquoise – the colour of the Turks. So I decided this time to go blue, instead of usual red riding girl. 🙂 With its six minarets and sweeping architecture it impresses from the outside. Unlike Haghia Sophia, this is still a working mosque, but no shoes, shorts or bare shoulders are allowed, so I needed to cover myself with a shawls. I remember my brother was amazed with the softness of a carpet inside the mosque, while I was impressed by chandeliers. 🙂 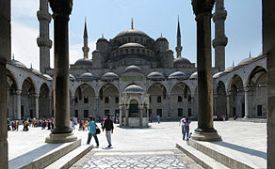 Continuing to explore the very same district we entered the Basilica cistern. The story about one of the oldest cisterns from the ancient world lies beneath the city of Istanbul (formerly Constantinople as mentioned before). It dates from the 6th century during the reign of Byzantine Emperor Justinian I. At the corner of the cistern there are bases of two columns carved with the visage of Medusa. The origin of the two heads is unknown, though it is thought that the heads were brought to the cistern after being removed from a building of the late Roman period. However, there is no written evidence that suggests they were used as column pedestals previously. Tradition has it that the blocks are oriented sideways and inverted in order to negate the power of the Gorgons’ gaze (greek’s growling female creature). 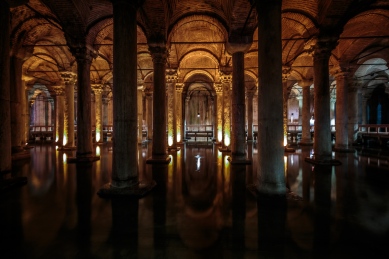 Little bit more down to the south of the city is the  Hippodrome of Constantinople. It was a circus that was the sporting and social centre of Constantinople, capital of the Byzantine Empire, as already mentioned. Today it is a square with only few fragments of the original structure surviving.

The Grand Bazaar is the world’s oldest shopping mall, covers several blocks and features a labyrinth of side streets to keep you lost for the better part of a day. Well, it did my brother and me. We lost, we wandered, we negotiated with traders and realized they are excellent merchants, we shopped and bought more things ever we planned or thought to buy! 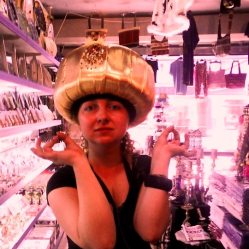 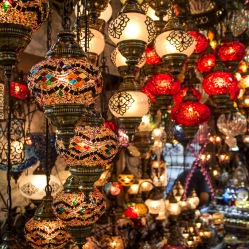 The following day we decided to deep a bit more into history, so we visited the National Archaeology Museum and saw the copy of the footprint of the prophet Mohammed, or the sarcophag of Alexander The Great (of Macedonia). 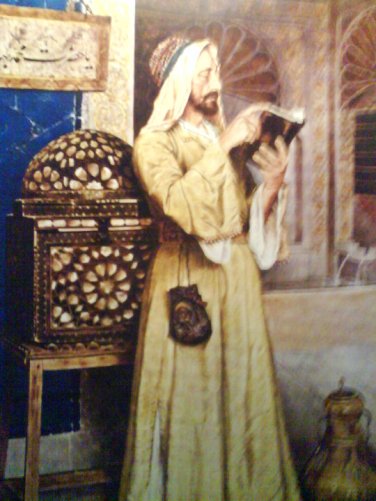 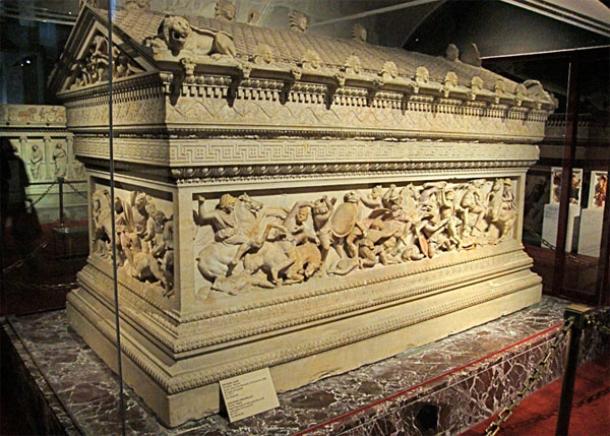 My favourite place was the Topkapi palace because of the lavishly decorated rooms with four courts of increasing grandeur, as it was the imperial enclave of the Ottoman emperors for four centuries. In the second court is the entrance to the Harem, then next to it the Imperial Treasury, housing a weapons display. And of course, the view from the palace terrace and gardens over the Bosporus is spectacular! 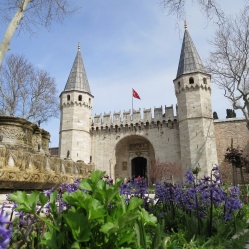 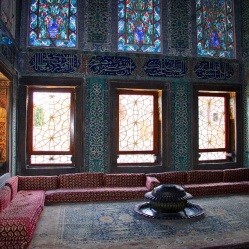 Inside the Topkapi palace

The view on Bosphorus

Pretty nice view on the strait of Bosphorus and the city itself spreads from the Galata tower. A medieval stoned tower built by the Genoese merchants. 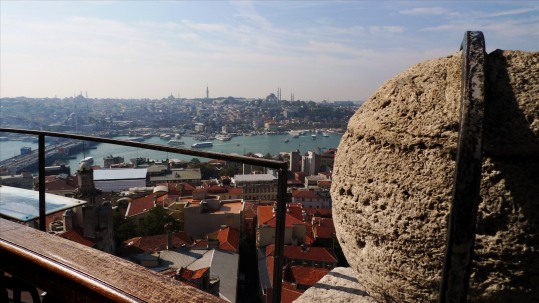 To go on the other side of Bosporus is easy. We walked across one of the bridges and enjoyed the view on blue sea and sky. Indeed, blue is the colour of Turkey.

Although, there is not much to see on the asian side, we enjoyed turkish delights, drank tea and famous turkish beer efes, smoked narghile and bought the Evil eye which is suppose to protect us.

Turkish tea with the view on Bosporus islet.