The head item is from the Dolac market, famous in Zagreb. The hearts are licitar hearts traditionally given by girls to their chosen young men for future marriage, after sunday […]

The head item is from the Dolac market, famous in Zagreb.

The hearts are licitar hearts traditionally given by girls to their chosen young men for future marriage, after sunday mass ceremony.

The reason why I started with this typical souvenir pattern of the city of Zagreb is because it appears as a theme in the Advent in Zagreb – the best Europe Christmas destination 2016 and 2017. If you don’t trust me, check here.

Just to mention that I was born in Zagreb and lived there for 4 years during my studies, so I am traditionally purger girl (from German der Bürger, meaning the citizen, nowadays dialect in Zagreb as it used to be part of Habsburg Empire) and might be a bit attached here.

Flying home for Christmas from christmasy Brussels to Krapina, small city nearby, I decided with my mom and brother to visit this best Christmas destination. Plus, I haven’t been to the center of Zagreb for more than 2 years, and I missed it.

We left the car at Arena Zagreb – a multi-purpose sports hall located in the southwestern part of the city and took the bus to the main train station: Kolodvor Zagreb, the main hub of the Croatian Railways network. In 19th century, Royal Hungarian Government (as that part of Croatia in that time was part of the Austro Hungarian Empire) authorised the building of the main station and maintenance shop in Zagreb. This beautiful building is typical Vienna secession style building of the Habsburgs, as many other buildings in Zagreb, Budapest, Prague or wherever Habsburgs spread their Empire.

From there everything starts! Historically and Christmasly.

In park Zrinjevac is located ice skating, with many small wooden houses around it and bars to drink kuhano vino (Croatian mulled vine) 🙂 and typical food to eat. 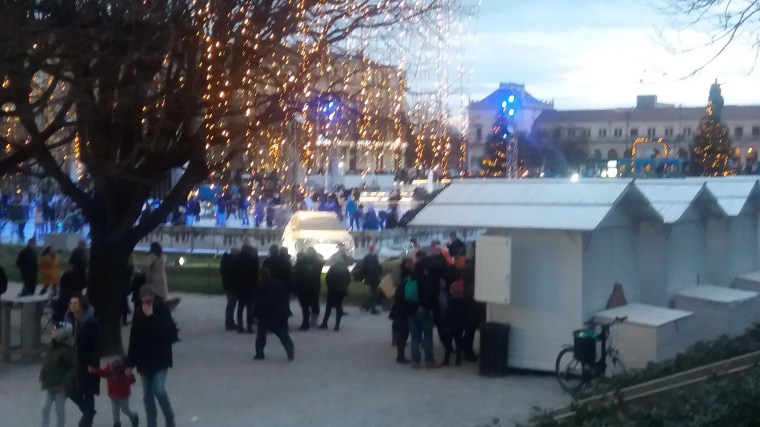 As already said, typical yellow secession buildings as of 19th century since the Austro Hungarian Empire is this Art Pavillon at park Zrinjevac:

From there we continued towards the Fooliranje part of Zrinjevac (engl. fooling around). The rounded open pavillon was hosting some local band tries around had a special glitter due to Christmas lights.

In the very first photo I am with my mother. 🙂 We even have the same patterned scarf we bought in Brussels. 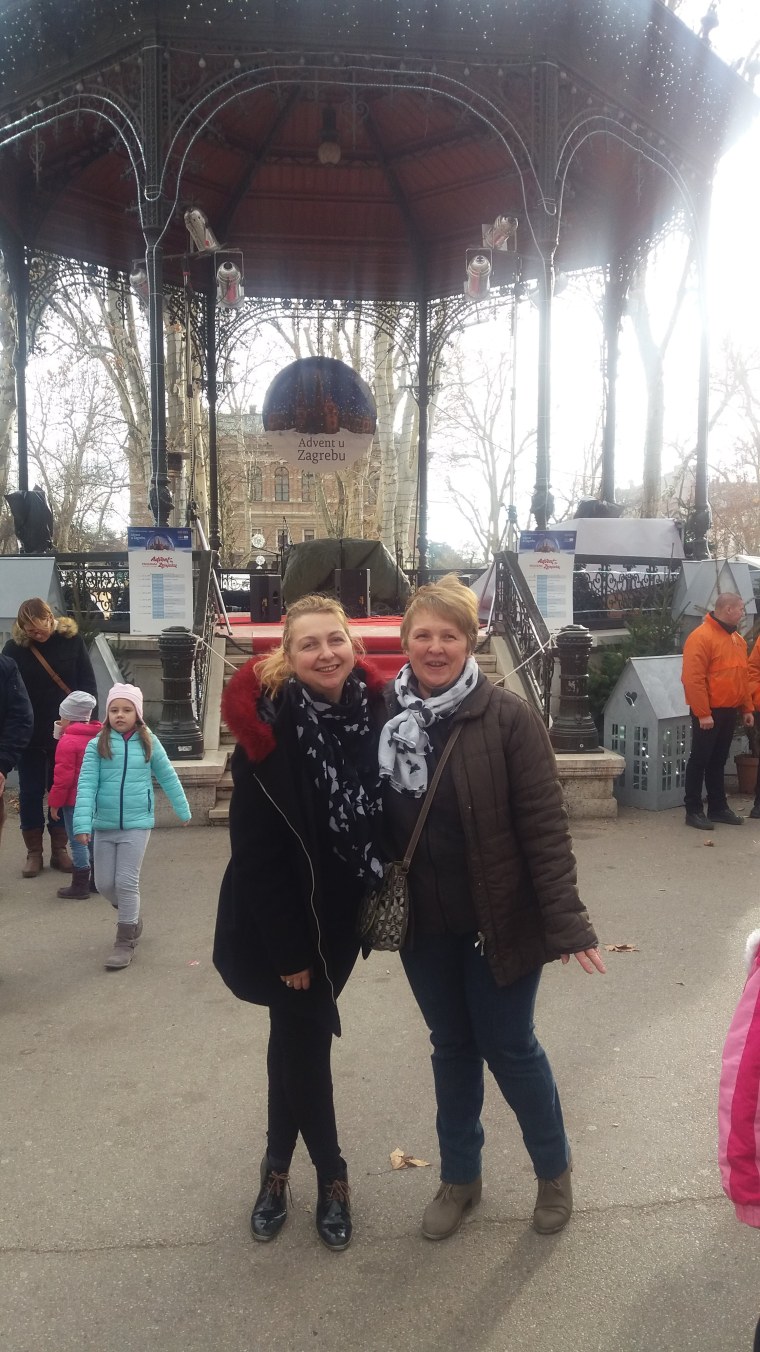 Continuing towards the main square, there was another wonder – Maric passage. The passage is completely covered with blue Christmas lights and branches of trees so it seems like you stepped into some magic wonderland.

Finally we came to the main square named after very important Croatian national hero Josip Jelacic who fought against hungarian oppression in 19th century during the Austro-Hungarian Empire, and the hungarisation of Croatian language. He also liberated croatian  poor people from serfdom in 1848.

You can see his statue at the main square, currently turned towards the south but it used to be towards northeast, facing the Hungarians.

There is the famous clock where all people that live in Zagreb usually meet. When I was studying in Zagreb, all the coffee meetings started ‘meet you under the clock.‘

Furthermore, I took a photo of the famous blue tram coming from Ilica – the longest street in the city.

The colour of Zagreb is blue, even though all the traditional souvenirs are red from Sestine. Like already mentioned licitar heart of sestine umbrella. My grandpa used to have these hanging of the mirror in his car.

We moved very soon towards the European square where is the Representation of European Commission to Croatia. There you can find the traditional food from the entire country – north, south, east and west, as the country is hit by two different climates (mediterranean and continental), hence the food and culture and history were/ are different.

The Zagreb Cathedral is the tallest building in Croatia, but also the most monumental sacral building in Gothic style southeast of the Alps. It is dedicated to the Assumption of Mary and to kings Saint Stephen and Saint Ladislaus. who started building the cathedral in 11th century.

As you can see on the photo below, the Cathedral used to be surrounded with walls because of the Ottomans arrival during the 15th and 16th century.

Inside the Cathedral, we visited the nativity scene and made the walk around.

Climbing towards the Upper town Kaptol, you literally jump into Middle Ages. The houses are smaller, the passages are narrow and combined with stairs called Windmill stairs (because they used to lead towards the old mill) or Stonegate or Meat street etc.

One of the most beautiful entrance to the Upper town is the Stonegate (13th century) with the statue of Virgin Mary inside of it – one of the most recognizable symbols of Zagreb. The story tells that at first there was a painting of Virgin Mary  which was untouched after the 1731 fire and it was described as miracle. To commemorate the event, grateful citizens built a chapel within the arch of the old Stone Gate.

Fun fact, next to the Stonegate, you can find the lion which holds the chains from the boat of Admiral Nelson from the battle against Napoleon at Trafalgar. (the link brings you to London and Trafalgar square where I was almost killed by an ambulance).

The Upper Town Kaptol functioned as the typical European hanseatic (free) city. It became free when ungarian king in 13th century needed to escape from Otomans. The city gave him the shelter and got the Charta of the Free Hanseatic city as a compensate.

Famous Croatian writer August Senoa, 19th century, belonging to the Croatian realism in literature, described in his novels the life of poor people and the rise of the handcrafters and citizenry. One of my favourite novels in the Goldsmith’s Gold. The  Treasure is actually young Dora Krupiceva, beautiful, poor but nobel. Today you can find her statue next to the Stonegate as well, holding the keys of the gates.

The main square of Kaptol is St Marko’s Square where is the Parliament and the Government of Croatia. Less important than the beautiful St Marko’s Church from 13th century with the oldest Coat of Arms of Zagreb (on the rooftop).

Very similar stories about the citizens of Kaptol of its time were written by Marija Juric Zagorka. She was the woman ahead of the society, publishing her novels under man pseudonym. Her famous stories about the women who were accused for witch crafting are all over the Upper Town. The legend says they gathered around the Tower of Lotrscak.

Worth to mention here that every day at noon, the Cannon of Gric breaks in the memory of the Victory over Ottomans in 15th century.

Upper Town is famous by its narrow streets and the extra nostalgic moments give the lanterns. The profession of the person turning on the old lanterns laterns still exists in the Kaptol. O tempora, o moris…

The best part of Advent in Zagreb is happening just here, at Kaptol, at Strossmayer’s promenade with the wooden houses, view on the city and the snow white – red decoration of the 1920’s when Zagreb started to breathe in its own way and citizenship to fool around. 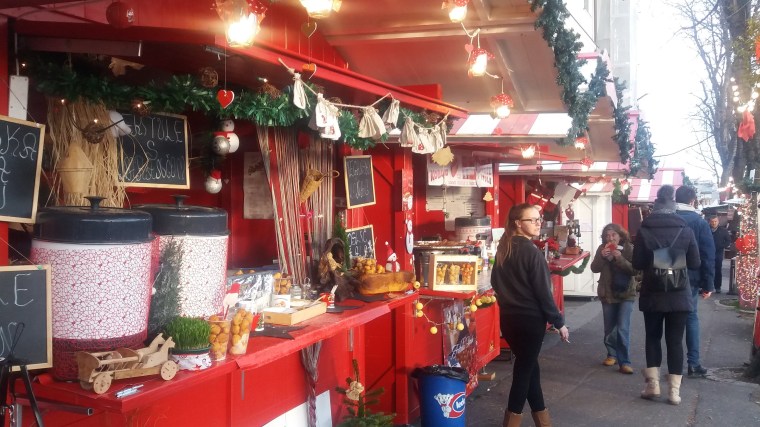 You can enjoy the view on Lower Town Gradec and New Zagreb (developed in the times of Yugoslavia as of 1950’s). 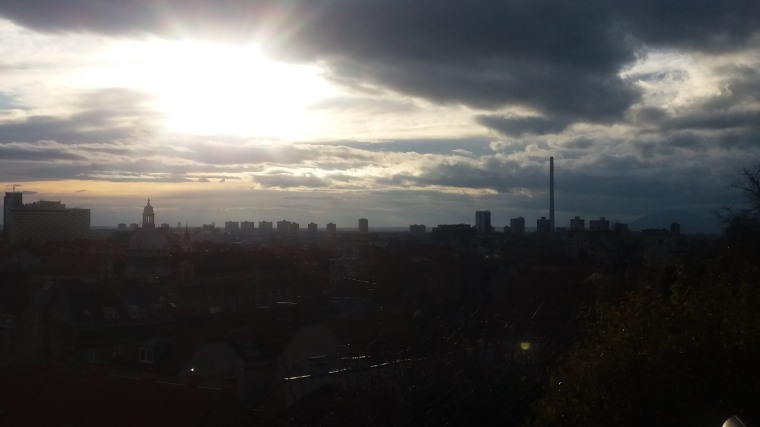 I enjoyed every detail capturing the moments and getting inspired for my Instagram story. 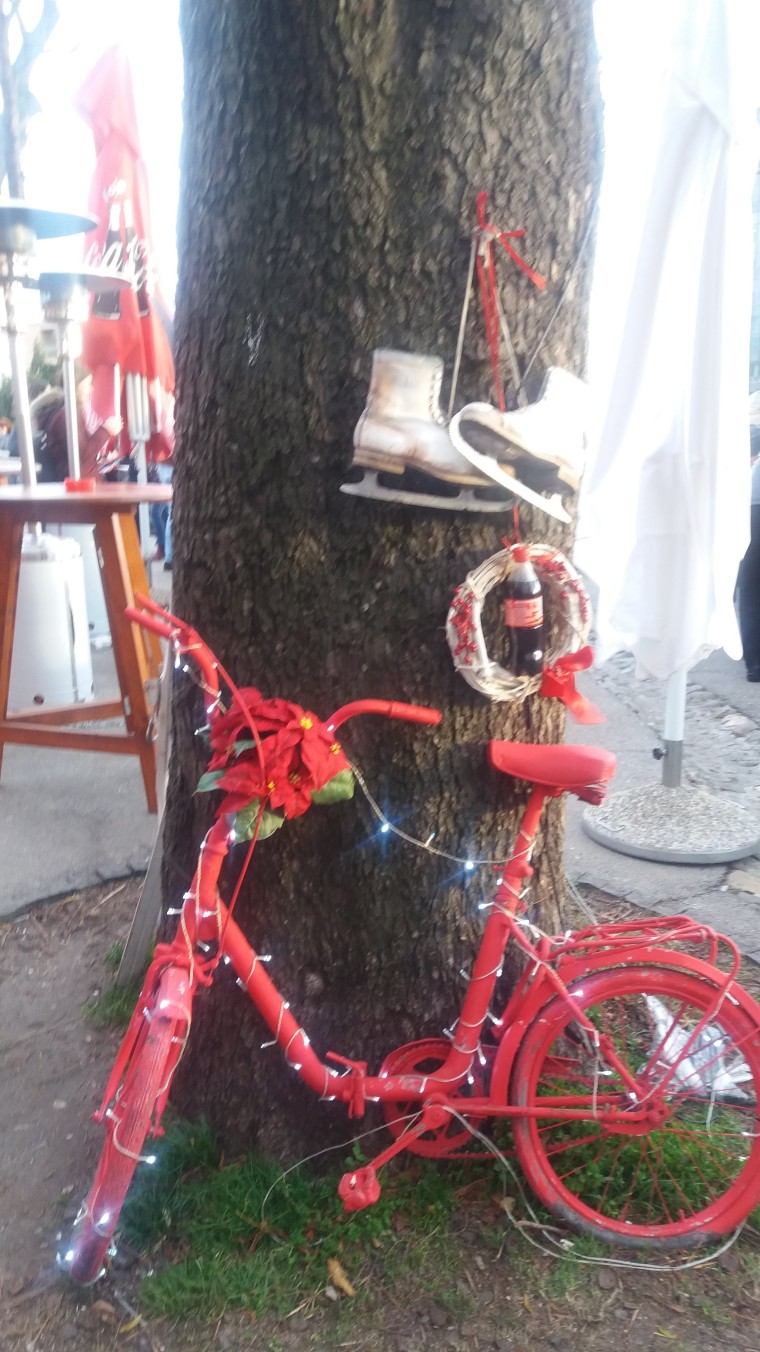 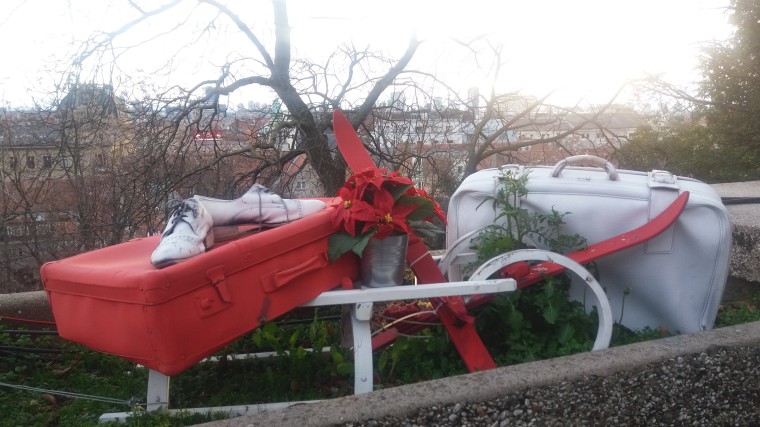 Once more, the Cathedral from here:

Very important thing and famous Croatian brend from the Kaptol is Museum of Broken Relationships. Nowadays the exhibition is all around the world with many broken hearted contributors, but it all started from here. My favourite item is the bicycle. After the break up, the girl didn’t have courage to get him back. After some time, she visited her ex, sat on the bike and drove out of the relationship. It was liverating for her, she said.

After the walk at the Strossmartre, we were going back down towards the Lower Town Gradec. On the right side is the World War II Tunnel now decorated with many colourful storytelling decorations. Every other day the choirs are performing too. 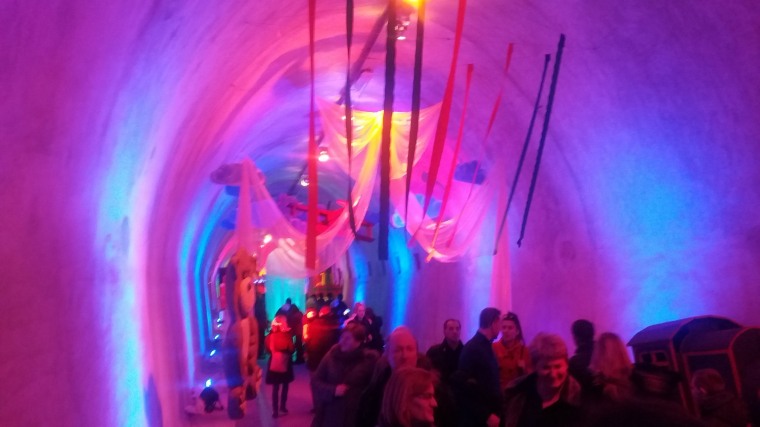 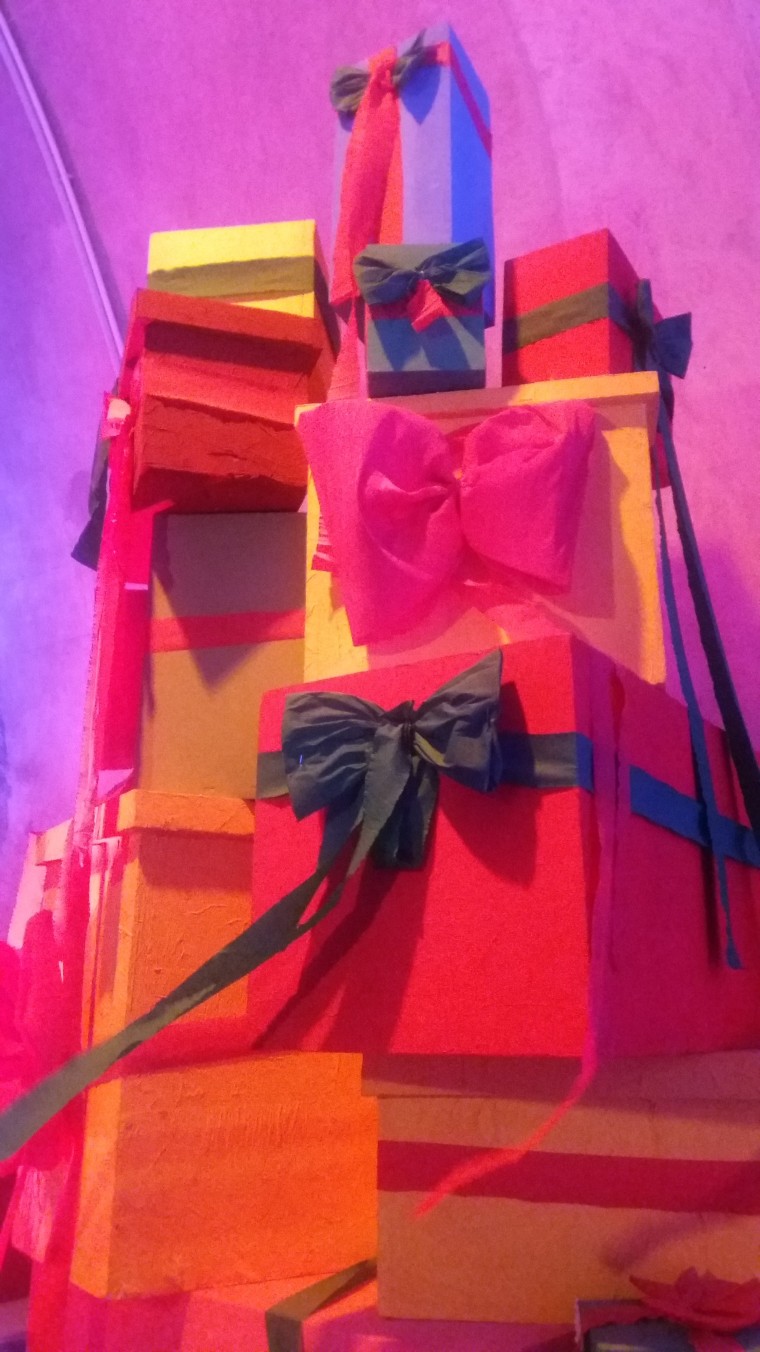 The tunel is T-shaped so one of the exits is at the funicular. The shortest funicular in Europe. It brings you back to Kaptol.

We continued going down down to Gradec to visit the nearby Flowered Square (even tough it is not its official name, but the citizens call it Cvjetni trg – because of the many flower shops there). Also, this is the place where many popular Croatians drink coffee and spend their time, especially Saturdays. It is also the so-called Spitza, meaning the celebrities peak when many journalists go around with their camera too, looking for some paparazzi shots. If you’d like to be seen, be sure you put some fashionable clothes and you will end up in magazines as a fellow stylish Croatian.

Personally, I just bought myself a bouquet, the so called puslec.

We finished our day at Kraš bomboniere bar having a hot chocolate and trying typical famous chocolates Bajadera and Griotte. Mr Kraš used to be in love with the prima balerina Bajadera from the Croatian National Theatre (also built by Habsburgs) so he named his chocolate after her. Thee romantic Croatians! 🙂

Croatians are also very proud on the best ski driver in the history of skiing. Her name is Janica Kostelic, she won the several World Cups, becoming one of the three women ever winning thge World Cup races in all of the sport’s five disciplines.

Thanks to her, the World Cup named after her: The Snow Queen Trophy is brought to the Sljeme Peak and Medvednica mountain- favourite destination of Zagreb citizens during the summer and winter time as well. They call it the lungs of the city because of the many alpine trees.

The Snow Queen Trophy is part of the Advent in Zagreb. Just ask any ski racer and they will always tell you that they have the best atmosphere here in Zagreb as the crowd is so into this sport.

This year, the numbers drawing will be at park Zrinjevac and the ski racers will come on ice skates. 🙂