Every summer, since I was a child, we would travel to the Island of Ugljan placed in the archipelag of the city of Zadar. This year I did the same trip. Flying from my lovely Brussels  to Zadar where I was supposed to meet my brother Martin who was travelling from the norther  part of Croatia […]

Every summer, since I was a child, we would travel to the Island of Ugljan placed in the archipelag of the city of Zadar.

This year I did the same trip. Flying from my lovely Brussels  to Zadar where I was supposed to meet my brother Martin who was travelling from the norther  part of Croatia to the south: Adriatic sea! ❤

This flight is my favourite flight since the craft is flying over the coast and sometimes you can see the coast of Italy too. I am every time more and more excited.

We both adore Zadar and its rich history. So we always stop to add one more thing on our ‘list to do when in Zadar’ before we hop on the ferry or boat to the Island of Ugljan.

Zadar is the oldest continuously inhabited city in Croatia. From the traces of human life from the late Stone Age, neolithic and later the Ilyrian tribe Liburnians (around 4th century BCE there was Ilyrian king Teuta whos pyrates were sailing along the Adriatic sea and robbing boats) when Zadar was known as Iader.

In 1 BCE  the city became a Roman colonia. It was during the Roman rule that Zadar acquired the characteristics of a traditional Ancient Roman city with a regular road network, a public square (forum), and an elevated capitolium with a temple. The main street is still called Kalelarga (lat. Cale larga – long street) and the other streets are seated at a 90 degree angle.

The city is surrounded by the city walls as the city was mostly under numerous attacks of Mlets (nowadays Venice) and the main entrance is built in the form of a triumphal arch, to give an impressive look.

There were the times when Mlets succeeded in their hikes, hence the Lion of Venice  and St Mark (patron of Venice) at the main portal, holding the Bible. Republic of Venice, burned the city which was helped by the Crusaders to spread the christianity.

I can not say enough about the collection of Roman artifacts  and later ages of croatian kingdoms (romanesque).

The first Croatian rulers gained control over the city in 10th century. In order to be recognized as the Kingdom, it was important to get official by the Papal state. The Croatian rulers decided to spread the nre religion – christianity. This is why croatian cost is full of small early mediaval (romanesque) primitive churches. One of the most beautiful examples is Church of St. Donat – a symbol of the city of Zadar and the most famous monumental building in Croatia from the early Middle Ages. It derives from 9th century and actually belongs to preromanesque era. 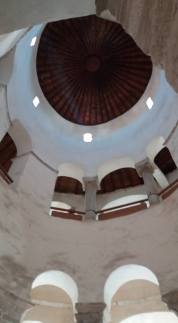 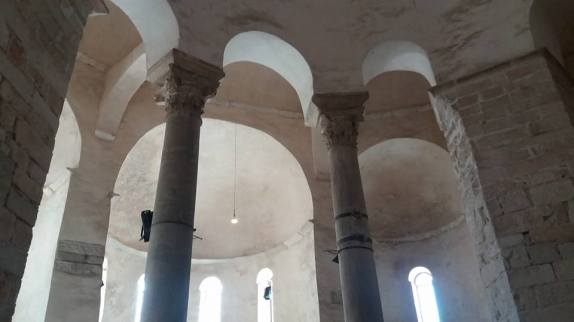 Behind the church there is a  Cathedral of St. Anastasia (croatian: Katedrala sv. Stošije), 12th century and its tower bell (croatian Zvonik). This  Roman Catholic cathedral is the largest church in all of Dalmatia (the coastal region of Croatia).

But the main patron of the city is Saint Chrysogonus (Sv Krševan, cro.)  with his own church built in Romanesque style and consecrated in 1175.

Zadar is a very vibrant city. I remember as I child, we would arrive early in the moring and every time we would go on a local market and have a coffee as well, before we would take the ferry to go to the island.

You can also buy many great souvenirs there.

Recently, it is also inevitable the exhibition Pozdrav Suncu or Monument to the Sun. It is the  22-meter diameter circle, with the solar modules underneath. During the night, the solar layers make amazing lightening.

This is only one of the reasons why people say Zadar has the most beautiful sunsets. In May 1964, Alfred Hitchcock checked into hotel in Zadar. The hotel’s location was one of the best in town and it was from there that the famed director opined that “The sunset of Zadar is the world’s most beautiful and incomparably better than in Key West, Florida.” This is a fact that Zadar residents have long known, but which the celebrity mention made world famous.

Time to go on a ferry…

Once I reach the island of Ugljan and the city of Preko, I know I am at my second home, after my hometown Krapina.

A beautiful church with old cemetary is placed in the center, as well. It’s name is St Stošija.

The church is placed a bit higher, above the center of Preko, typically to make every christian prayer humble.

Even though it is in the center of happening, its peace and tranquility is showing the high respect from the locals towards the faith they have.

But the best way to feel the Mediterranean atmosphere is by walking along the quay or sipping a favourite drink or reading a favourite book on one of the terraces with a view of the Zadar Channel.

Above the coastline of the island spreads the highway – one of the best views and moments you could have in your life, while driving it. The view is amazing on the blue sea and local islands, green pines, Zadar cannal, big boats and yachts. The smell of pines, the sound of crickets…

Getting higher above than the highway, in the mountains above Preko, is the castle of St Michael, which was built by Eastern Roman empire (Byzantine Empire) in the 6th century. In the 13th century the castle was rebuilt by the Republic of Venice. Its main purpose was control above channel of Zadar and group of islands behind the island Ugljan. The castle was sacked by English crusaders on their way to the Holy Land, and by the Nazis in World war II.

The St. Michael’s fortress is 265 m above the sea level). The view from the fortress spreads over more than 200 islands of the archipelago of Zadar and Kornati National Park.

The high position of the castle made it the perfect lookout and listening station for the occupying Germans. Today, the castle is home to a telecommunications station.

The place is quite difficult to access whether by car, bike or on foot, but it will give you memories for a lifetime. As I said: beautiful view of Preko, Zadar, and dozens of other islands!

In the hills of the island you can also find cute benedictinian monastery St Kuzma and Damjan or as the local people call it Ćokovac.

Benedictines built a 13th century Romanesque church with a monastery bell tower and typical fragments of folk decoration from the time of the Croatian dynasty Trpimirović.

The monastery was attacked couple of times by the Mlets, the then Republic of Veneto, nowadays Venice but the monks managed to safe some of the most precious relics as well as the old books written by hands, inkunabule before the time of the press machine invention.

The monks are nowadays growing lavender and honey and gardening.

If you want to go completely on the other side of the island, where is no civilisation, no electricity, no internet signal then I recommend you The bay of Svitlo (cro. the light). It is kinda Robinson Crusoe tourism, but is nice. There are high cliffs from wich you can jump and later watch the sunset. I went there once with friends and got suburned, however it was precious.

But places are always hiding some sad memories, isn’t it? The story about Priješke lavandijere (the washerwomen from Preko) started in 1891.

In the 19th and early 20th centuries, many of the female citizens of Preko were earning for their families by washing the clothes of the gents in Zadar. But the tragic death happened of on November 2, 1891, when 16 women died in overturning of a ship carrying clean linen ready for delivery to their owners.

The story is witness to the tough life of the washerwomen.

The washerwomen used to go for the laundry to Zadar on Monday and then washed goods return to their owners on Saturday sailing or paddle boats. The laundry was washed in pots using ashes and soap from home labor. After washing the laundry, they wore it to the sea shore for the rinse.

On the mentioned date, at 7 o’clock, the boat sank, carrying washerwomen to Zadar and killing 16 of them. Not far from the islet of Galevac (Školjić), the boat, under the storm bend over, overturned and sank to a depth of three meters. Of the 31 passengers, seven men and 24 women died. All these that were stuck inside of the ship, locked in their deck lids, which protected them and their garments from stormy weather. The oldest washer was 75 years old, and the youngest was 14, and two pregnant women were among the washers too.

Moving back to the happy and present themes!

The island has more than 1,000 pieces of the olive trees.

Next to Preko, is my second best place at Ugljan, It is called Kali, and known as the fishing place since the old times. First times mentioned in 1325, but dating from the times of neolithic. The present settlements date back to the Middle Ages. It is also home to Califfi Castle and many old historic mediterranian houses of wealthier society.

The place is famous by their local fešta (cro party, from ita fiesta) about the fishing life and food. That day, all the fishing boats, cro kočarice are sailing around the port, hunking and notifying the local people (and tourists) that the fešta is about to begin.

The local food is guaranteed in mass.

If you got hungry in the mentime, except the local food from the fešta, I can recommend you the Konoba Dido Šime and Restaurant Muline at Muline.

Only about 80 m from Preko lies the idyllic islet of Galevac (Školjić), covered with dense Mediterranean vegetation that shelters the 15th century valuable monastery of Franciscan friars of the third order.

The entire islet is walkable in 15 min. Its rocky beaches make it as a popular but quite swimming place, due to the local monks and the fact it  carries the Blue Flag – a symbol of clear sea.

In case you are enough of Ugljan, there is always a possibility to drop to the nearby island of Pašman. The two islands are connected with the gorgeous bridge Ždrelac. Feel free to stop at the bridge and have a breathtaking view.

From the island of Pašman and the city of Tkon, I usually take a ferry to the coastal city Biograd na moru to attend the local fešta called Bila noć (cro dialect White Night).

The local food and music is guaranteed!