A perfect weekend getaway with a friend! Landing a bit late in the evening, having a late dinner and smashing into the city for Saturday night! The dinner was quite […]

A perfect weekend getaway with a friend! Landing a bit late in the evening, having a late dinner and smashing into the city for Saturday night!

The dinner was quite greasy: a soup, breaded fingers with melted cheese and even the fish! But the zeppelins (Lithuanias national dish – large-sized dumplings made from a mixture of cooked and raw potato dough filled with pork and covered with a generous ladle of a bacon and sour cream sauce).

So the night in Vilnius started! We visited couple of bars and drank lithuanian beer like Švyturys or Sakiškių  Pale Ale.

As the next day started a bit shaken, we decided to visit first the local market hall to get rich with vitamins and proteins and also to try local home made products. 🙂

The next stop was The Gate of Dawn– a city gate in Vilnius and one of its most important religious, historical and cultural monuments.

It was built in 16th century as a part of defensive fortifications for the city of Vilnius, the capital of the then Grand Duchy of Lithuania. Out of ten gates, this is the only remained remains, while the others were destroyed by the order of the government at the end of the 18th century.

In the 16th century city gates often contained religious artifacts intended to guard the city from attacks and to bless travelers. So the Gate of Dawn as well: The Chapel inside contains an icon of The Blessed Virgin Mary Mother of Mercy, said to have miraculous powers. It has been worshiped by  both Roman Catholic and Orthodox inhabitants of the city. 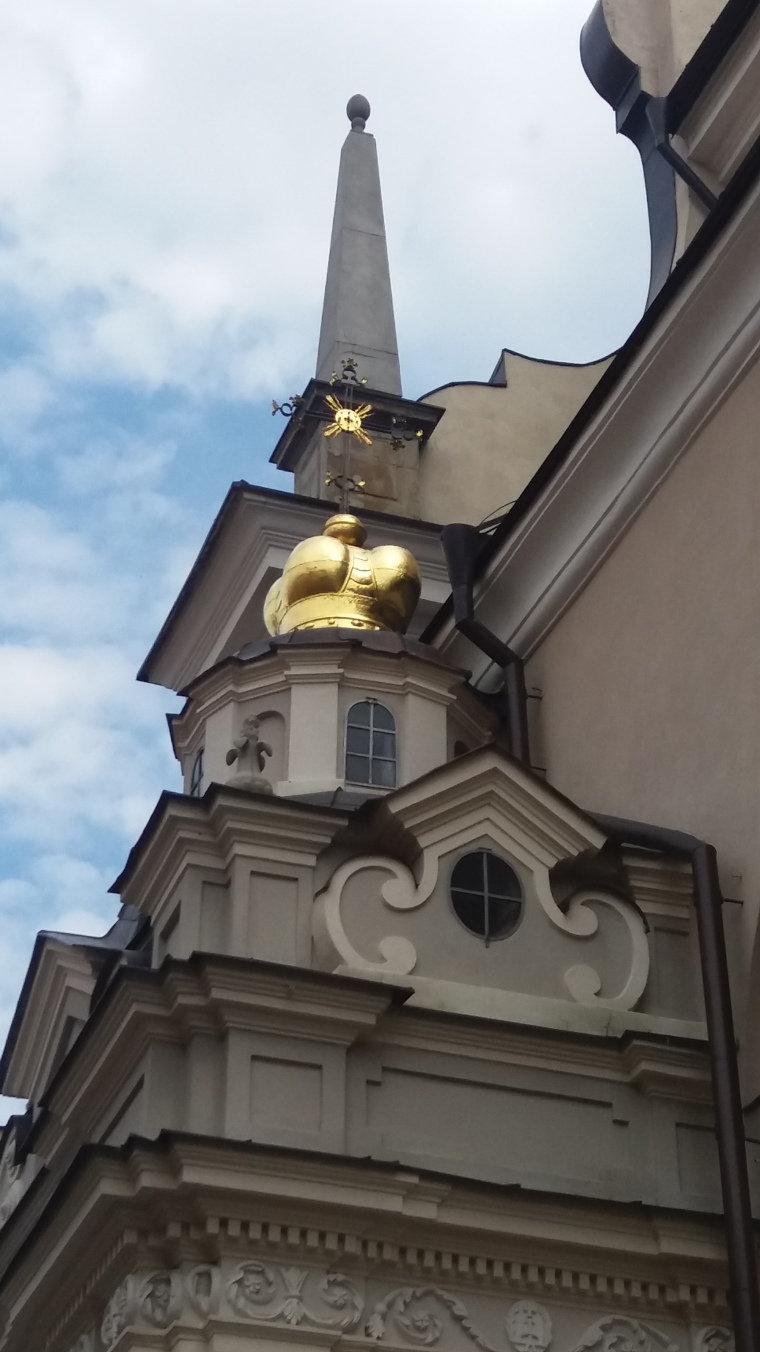 The most impressive part for me was of course, the Old town.  It is one of the largest surviving medieval old towns in Northern Europe and under UNESCO heritage as it collects gothic, renaissance, baroque and neoclassical architectural style. 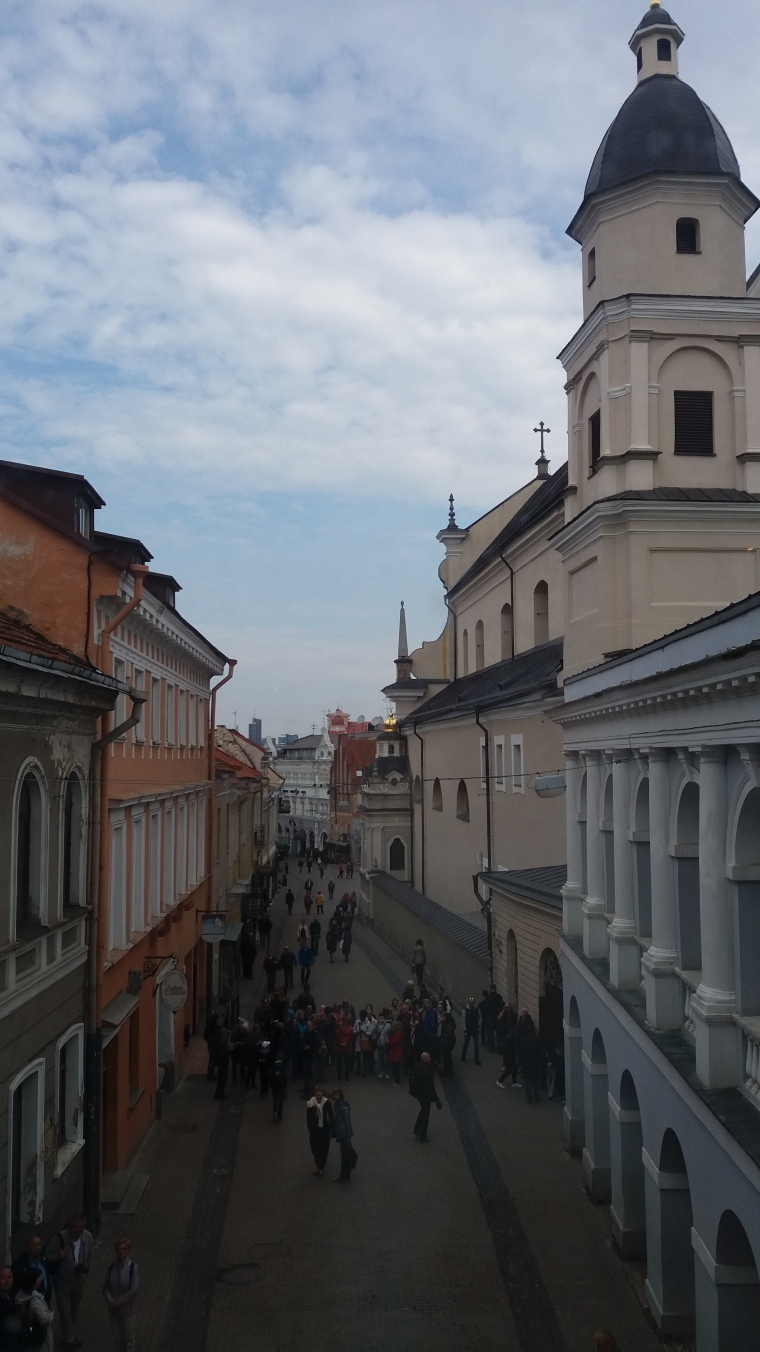 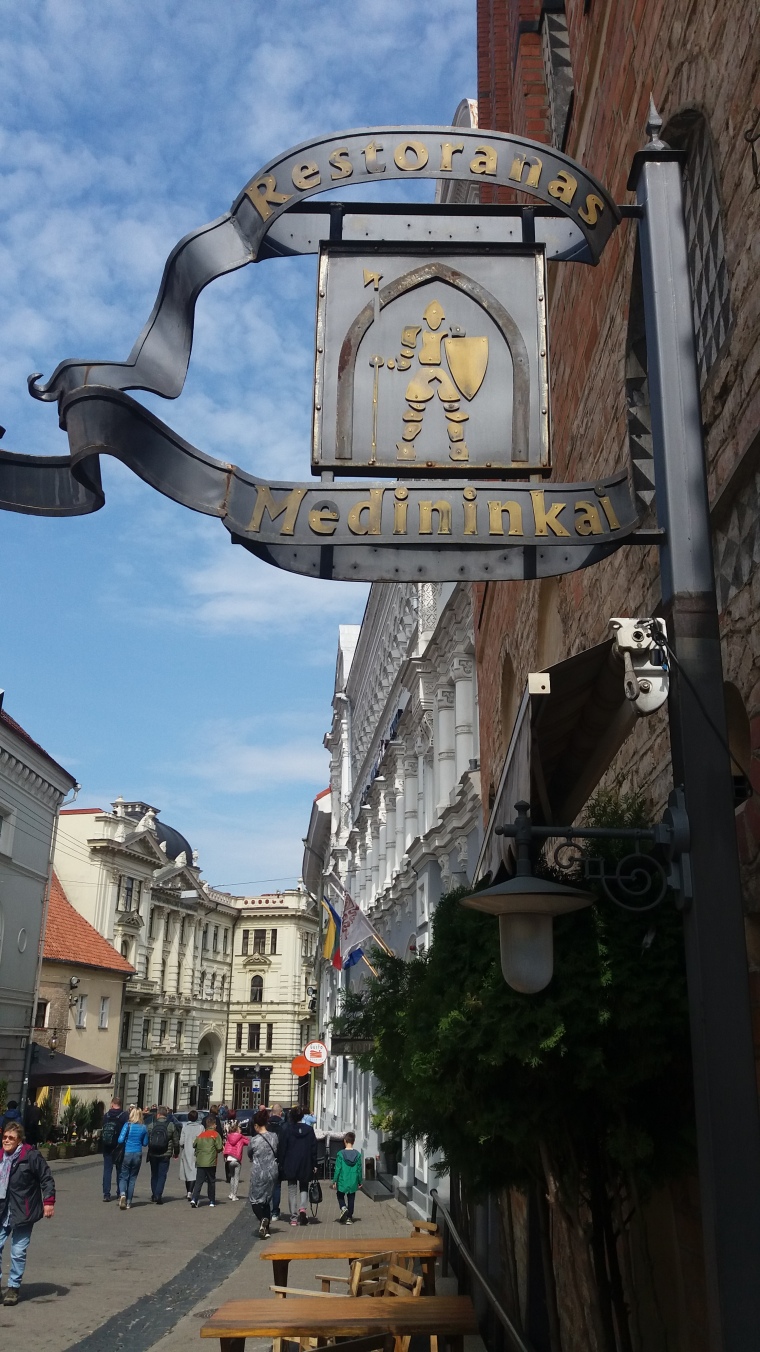 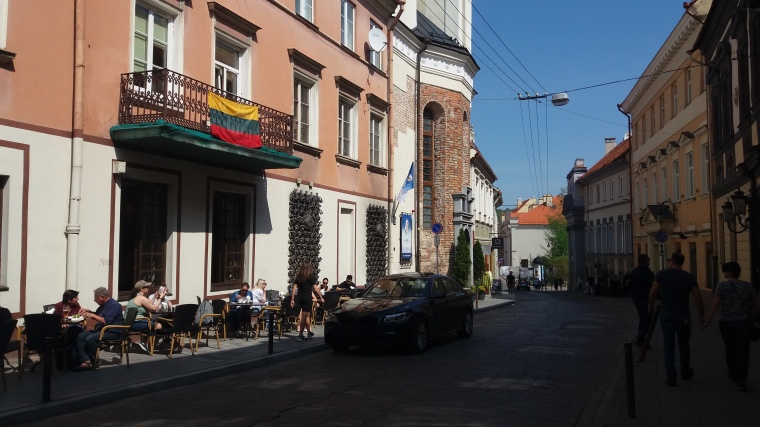 Before World War II, Vilnius was one of the largest Jewish centres in Europe. Its Jewish influence has led to it being described as the “Jerusalem of Lithuania” and Napoleon named it “the Jerusalem of the North” as he was passing through in 1812.

A Modern Art Centre is located on Literatai street where you can find the items on the wall about all the literature authors somehow connected to Lithuania. I was particularly interested in the mouth prosthesis representing the critics in literature and in the little book of Thomas Harris, the author of Hannibal Lecter who wrote that this serial – killer is from Lithuania.

Vilnius indeed has many churches: orthodexed and christian catholic churches. We visited plenty of them as they were all so close to each other and usually on our way through itineraries.

Politically significant and interesting to me was Church of Virgin Mary Ascension which was somewhat destroyed but under construction. This Greek Catholic Church has the exhibition of photos of Maidan protests in Kiev, Ukraine.

Or St. Anne’s Church which is a Roman Catholic church – a prominent example of both Flamboyant Gothic and Brick Gothic styles and apparently the most popular church in Vilnius to get marry. The legend says Napoleon liked this building so much that he wanted to bring it back to Paris. Oh well…  🙂 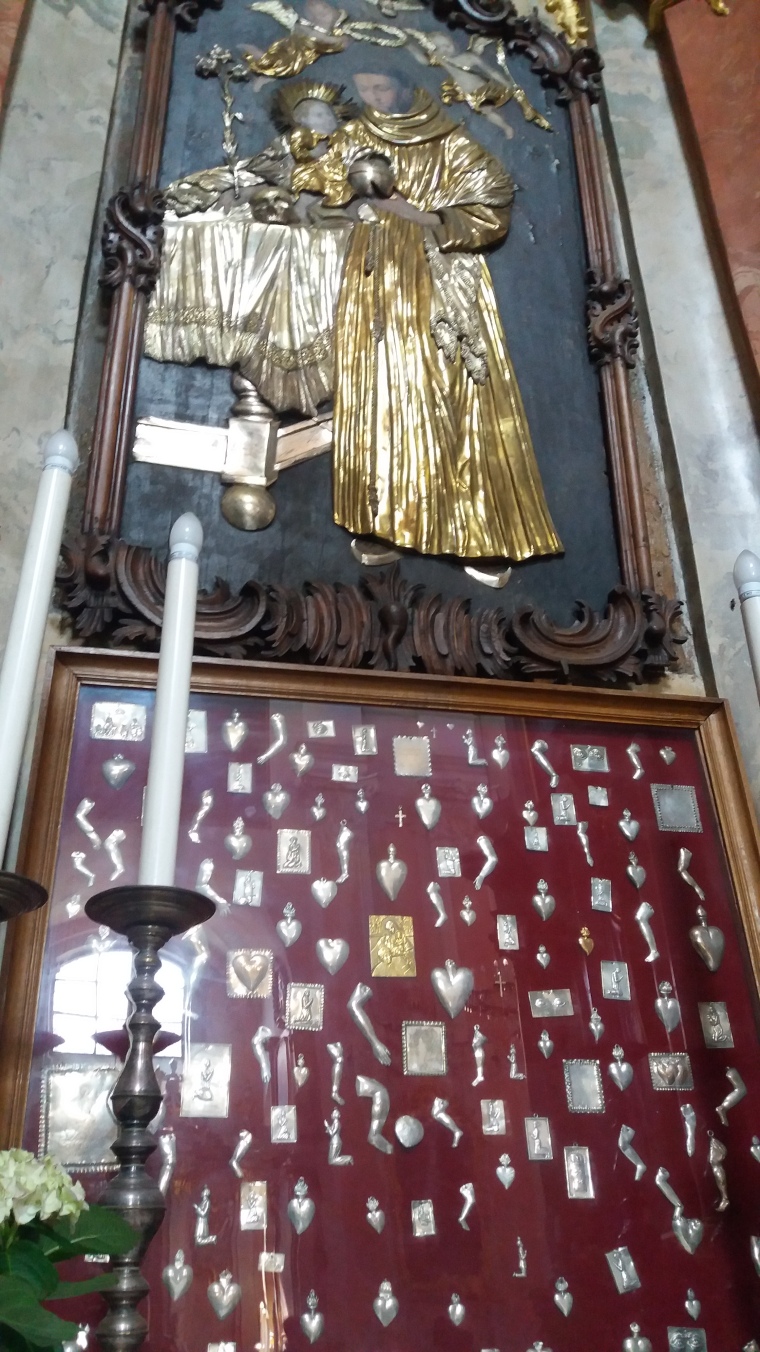 The last one I am going to put here… Gosh, there were many… 🙂

Okey, moving on… or not? …in 2009, Vilnius was the European Capital of Culture. Its main landscape is the Cathedral Square with the Cathedral and the Bell tower which was part of the city walls as well. 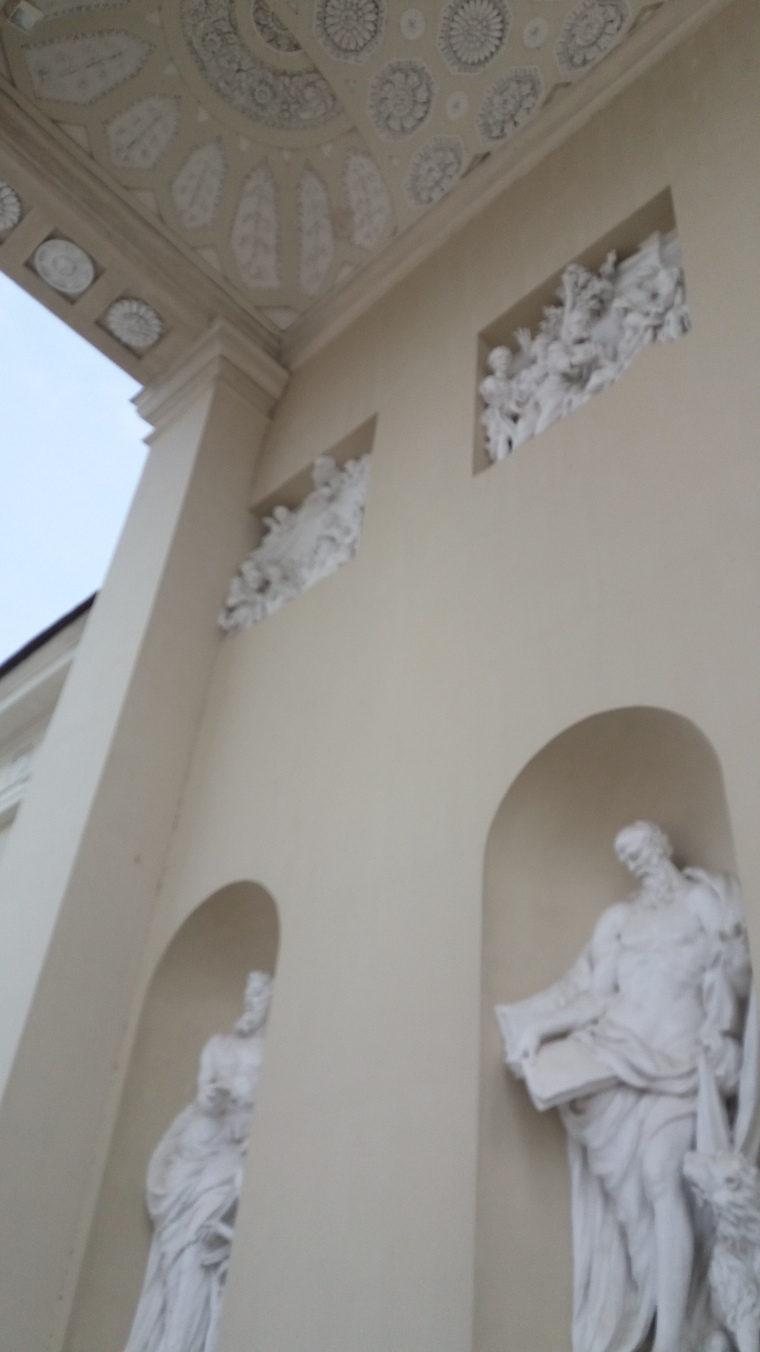 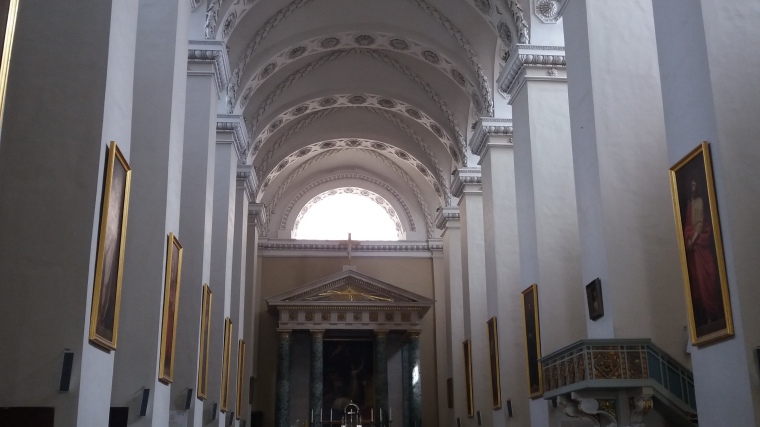 If you stand in front of the Cathedral and make a wish and turn around three times – the wish comes true! So we did it! The only thing is that I forgot to close my eyes due to excitement…

The Statue of Gediminas – The Grand Duke of Lithuania is there as well since his coronation took exactly in this church.

There is also a Gediminas tower but it is hard to visit it now as the entire hill is under reconstruction. Instead of that, we went to the Hill of Three Crosses where from we enjoyed the view on entire city and the tower as well.

According to a legend, seven Franciscan friars were beheaded on top of this hill. Wooden crosses were built in the location since the early 17th century and later replaced with stoned ones. It soon became a symbol of the city and an integral part of the city’s skyline.

The three Baltic states: Estonia, Latvia and Lithuania are celebrating 100 years of independence this year so the hashtag #100 can be found around. We found one in front of the Presidential palace.

The Duke has even his own shopping street: Gediminas avenue and the theater there with the sculptures of muses, which to me are a bit scary old ladies but who am I?

When it comes to Baltic Amber, Lithuanians are the greatest source of information, history, and the real product itself, natural Amber. It is far more than Fossil Resin. It is the symbol of the country and the soul of Lithuanian people. They are immersed in Baltic Amber history and mythology, awed by its beauty and ever respectful of its amazing healing powers.

Remember Christian in Copenhagen? And my bad impression about it? Well in Vilnius there is something similar but I liked it much more than the first version. It is called Užupis which means “the other side of the river” in the Lithuanian language and refers to the Vilnia River. 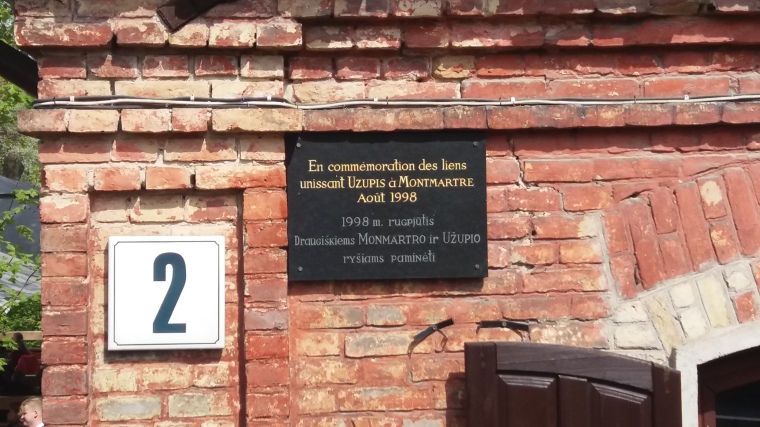 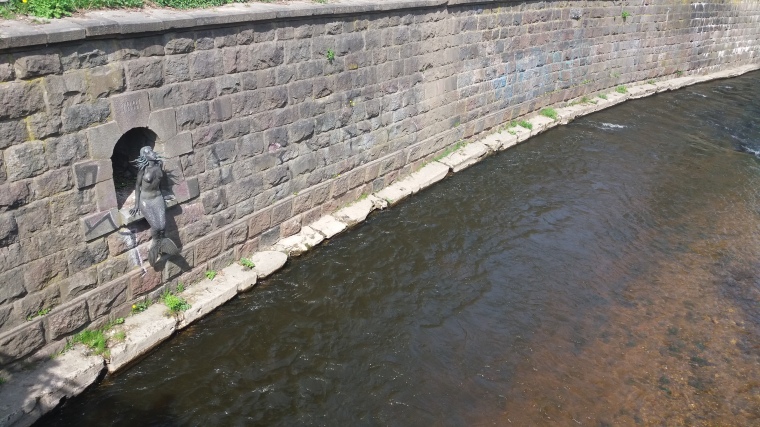 They are actually even having their own parliament which is a bar, the army which they do not like to call the army but the Guardian angels and a flag: the hand with a circle in it symbolizing they are not corrupted as the money falls through their hands.

The most interesting part is the Constitution stating funny but also remarkably thinking statements like: Everyone has a right to die but it is not obligatory. 🙂

Theeeen, this weird thing… it occurred during the lunch time in one of the shopping streets around…  kinda reminded us on our supposed to be 4 stars hotel 🙂

Unfortunately we didn’t manage to go to the museum of the Soviet spies and tortures (next time Vilny!! 🙂 ) but we found next to it this monument dedicated to the victims of communism.

For the end, something to think about and what made my day in Vilnius… it is kinda hipsterish, I know… but give it a go! 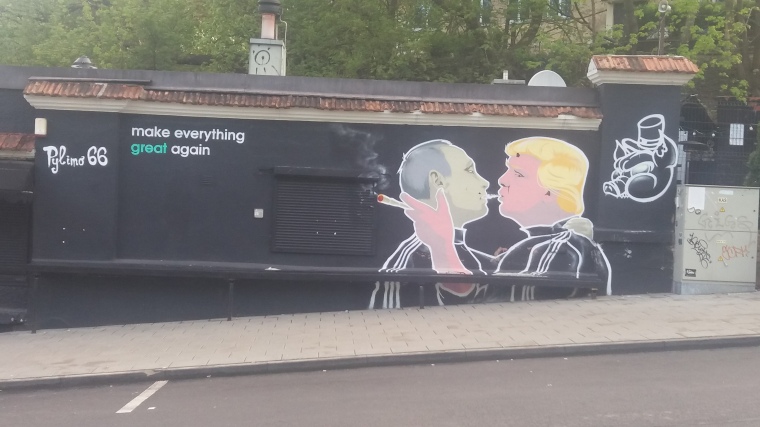