The city that lives as a huge tourist site!! I know there is much more then this of Barcelona, but being there twice, always taken out to places from my […]

The city that lives as a huge tourist site!! I know there is much more then this of Barcelona, but being there twice, always taken out to places from my local friends – it still gets me this feeling of huge tourist concentration.

It is also famous by lots of pick pockets – the unusual ones with ideas of stealing you that would amaze you and make you wonder how?

Today in a conflict with the main seat, but that will not be the topic here, Catalunya is shown on the map here to get idea of its location and importance through the centuries of trades and also home of spanish mediaval Jews (Sefphardi Jews) – I will explain 🙂

It is sixth most populous urban area in the European Union after Paris, London, Madrid, the Ruhr area and Milan.  It is the largest metropolis on the Mediterranean Sea, located on the coast between the mouths of the rivers Llobregat and Besòs, and bounded to the west by the Serra de Collserola mountain range.

Founded as a Roman city, in the Middle Ages Barcelona became the capital of the County of Barcelona. After merging with the Kingdom of Aragon, Barcelona continued to be an important city in the Crown of Aragon as an economic and administrative centre of this Crown (the daughter Catherine of Aragon from the united marriage of Isabel Castillana and Ferdinand Aragon married English King Henry VIII. This marriage, 15th century – was one of the most prominent marriages in the world since King Henry VIII fell in love with Ann Boleyn and completely separated England from the Pope,  pronouncing the Anglican Church and himself the Head of Anglican Church in England).

From these times is the Grand Royal Palace – a complex of three historic buildings on Plaça del Rei, once home to Aragon kings (14th century).

Charles V – who was both King of Spain and Holy Roman Emperor during the mid-16th century – ruled from here as well. These structures are part of the Barcelona City History Museum.

Personally, I adore the Roman and  medieval Barcelona. My friend took me through those neighborhoods teling me stories. My eyes were as big as an apple.

The Roman colony (Barcino) that grew into Barcelona was founded around 15 BC. Some of the buildings in the Gothic Quarter date back to the Roman settlement in Barcelona.

Part of it is Jewish quarter, which was – like elsewhere in Europe  time, at the outgrowths of segregated ghettos instituted by the surrounding Christian authorities.But in Barcelona, the Jewish community had a major role and contributed to the commercial expansion of the city. They had their own institutions and were not subject to municipal authorities, but referred directly to the king.

Barcelona was a centre of Catalan separatism since then, including the Catalan Revolt (17th cntury) against Philip IV of Spain. The great plague of 17th century halved the city’s population, including the riots of Jews accused for economical domination.

Fun fact, in Jewish / Gothic Quarter, nowadays the drying clothes is allowed only there – remarking the times of once vivid trade neighbourhoods. 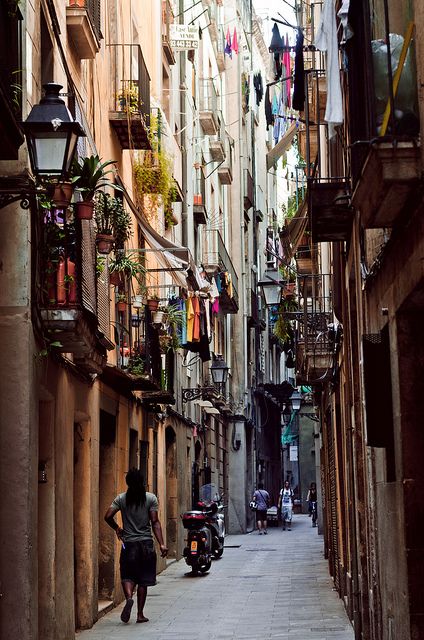 Part of the Gothic Quarter is the Barcelona Cathedral, so yeah the Gothic cathedral  built in 14th century.

Dedicated to Eulalia of Barcelona, co-patron saint of Barcelona, a young virgin who, according to Catholic tradition, suffered martyrdom during Roman times in the city. One story says that she was exposed naked in the public square and a miraculous snowfall in mid-spring covered her nudity. The enraged Romans put her into a barrel with knives stuck into it and rolled it down a street (according to tradition, the one now called Baixada de Santa Eulàlia). The body of Saint Eulalia is entombed in the cathedral’s crypt.

I had a privilege to enter the City Hall or in catalan Casa de la Ciutat – the 14th century building with beautiful neoclassical façade.

In the 18th century, a fortress was built at Montjuïc that overlooked the harbour. It was built nearby Jewish cemetary. Also, the name comes from Mount of Jews.

Today, one can visit there Palau Nacional which is today National Art Museum of Catalonia.

Inside you can see early works of young Picasso or Rodin as they lived there in their times (early 20th century) or some early Christian altar works of art. Unfrtunately Guernica isn’t there but in Museo Reina Sofia in Madrid. 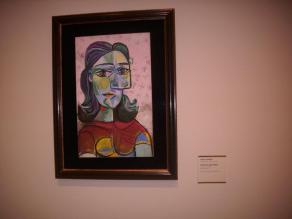 Huge part of Barcelona is Antoni Gaudí. This architest (19th – 20th century) is best known for Catalan Modernism. Sagrada Familia is his biggest work of art, still not done yet, even though Gaudi died almost a century ago. It is said he died laying down on the tram rails to get the perfect angle. Unfortunatley the tram hit him is that moment and he died. 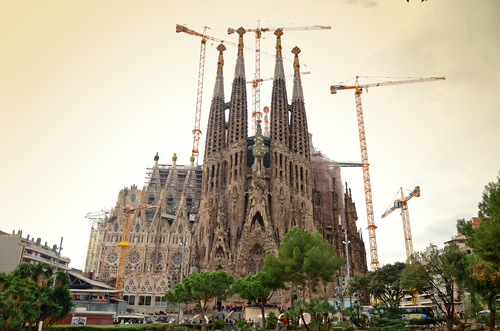 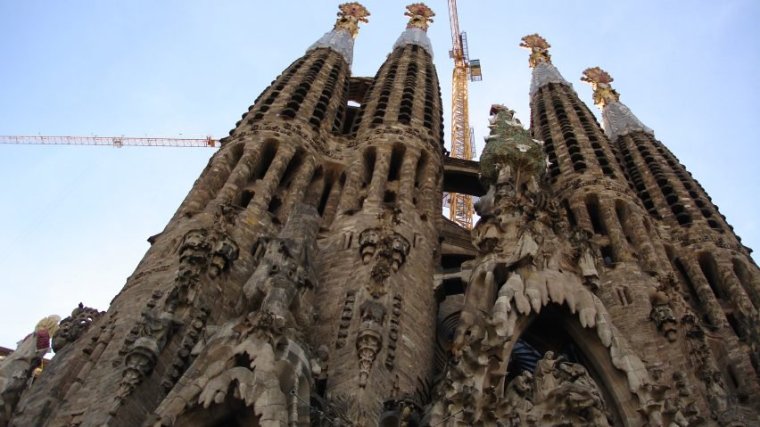 The style of la Sagrada Família is variously likened to Spanish Late Gothic, Catalan Modernism and to Art Nouveau or Catalan Noucentisme. You can spot the façades and the attempt to glory of Jesus Christ: the Nativity façade to the East, the Passion façade to the West, and the Glory façade to the South. Actually, The Glory façade, on which construction began in 2002, is not done yet, but it will be the largest and most monumental of the three and will represent one’s ascension to God. It will also depict various scenes such as Hell, Purgatory, and will include elements such as the Seven Deadly Sins and the Seven Heavenly Virtues .

Interior is just different interior of all churches ever seen, just like the exterior. Gaudi’s idea was the intersection of various geometric forms to create the heavenly atmosphere.

Themes throughout the decoration include words from the liturgy. Also, Gaudi made himself a grave below the main aisle.

The Park Güell composes of gardens and architectonic elements located on Carmel Hill (one of the seven hills of Barcelona). It was designed by Gaudi as well saturated with symbolsim.  Gaudi was admiring the nature and gettig inspiration from it cobining the analysis of geometry. 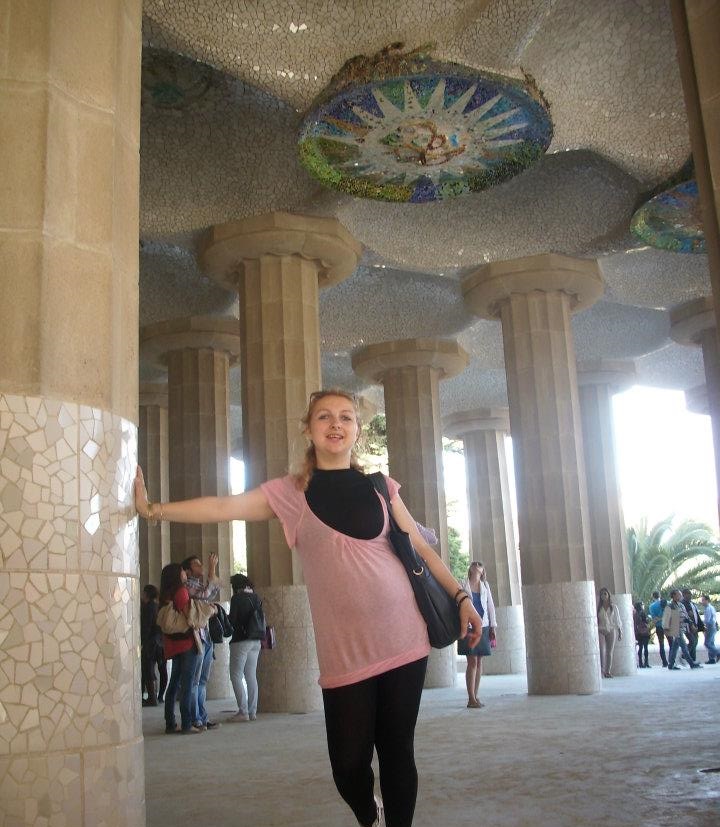 All of these is part of the UNESCO World Heritage.

And if you ever get there, the great view on the city and Mediterranian sea is guaranteed. 🙂

It is inevitable to mention other unique designned buildings of Gaudi such as Casa Battlo. Considered as part of his masterpieces it is called also Casa dels ossos (House of Bones), as it has a visceral, skeletal organic quality.

Or Casa Mila – popularly known as La Pedrera or “open quarry”, a reference to its unconventional rough-hewn appearance .

Or Placa Reial where you can find thhe street lamo he designed, called Lampposts. Also, notice the path and guess where the inspiration came from? 🙂

For the end I recommend to visit the beach La Barcelonetta and drink Estrella or Selecta beer at the beachside or visit the prestigous bars and have a glass of famous sparkling wine Cava or Freixenet whose preparation contains storage of this beverage in amphoras under the sea for many years before it is served at tables.

Talking about beach bars, I visited Opiu Barcelona. What started as a normal bar with some music to dance, soon turned into the moment ‘jar falls down again’. Once the curtain behind us opened, this happened: 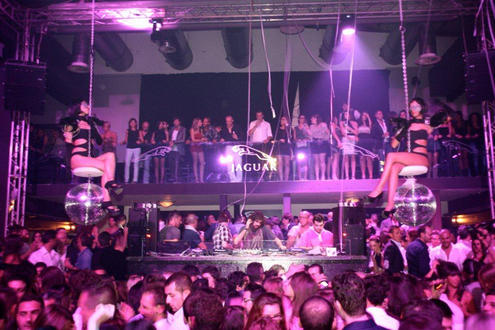 Back to serious exploring of Barcelona. There is Plaza Catalunya where from La Rambla starts – the most popular street of Barcelona.

La Rambla is always  popular with tourists and locals alike. The Spanish poet García Lorca once said that La Rambla was “the only street in the world which I wish would never end.”

La Rambla stretches for 1.2 kilometres all the way till the Port Vell with the Christopher Columbus Monument constructed in honor of Columbus’ first voyage to the Americas. The monument serves as a reminder that Christopher Columbus reported to Queen Isabella I and King Ferdinand V in Barcelona after his first trip to the new continent.